The Hollywood Reporter had an interview  (spoiler warning) with the co-creators of Netflix’s The O/\, Brit Marling and Zal Batmanglij.  In the interview Batmanglij says this:

“What is the finale other than hypermasculinity meets hyperfemininity?” 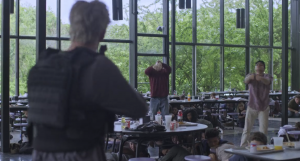 I’m interested in how intersectionality figures in this story. It is a story about storytelling, about the authority of a woman to tell her own story, how we judge the truth of the story…most importantly, her control over who she tells the story to and for what reason.

I see a striking contrasts between what we do alone and what we strive to do together. Family is positioned as an organization of relationships that should be interrogated.

Over and over, in this story I see the struggle to gain one’s life and identity in an ecology constantly challenged because of masculine struggles for power. We see the struggle among power as a Faustian bargain for knowledge, as a Frankenstein desire to control life and death, as bullying of several different kinds, and also as a Feminist notion of intersectional transcendence.

I’m very interested in how other people from different subject positions read this text. I’m suspicious that most of what I read online is coming from the same kinds of people (too many like me). I hope there is a wider diversity of reaction to this story than what I’m seeing initially.

It’s also another example of what is made possible by the slightly (but still inadequately) increased diversity of our current media environment.